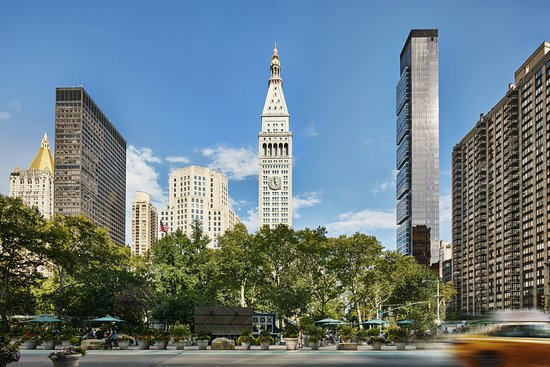 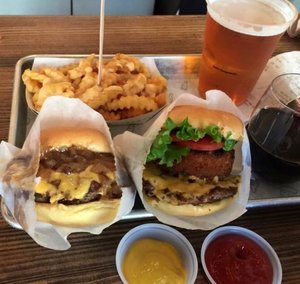 The property in New York is at the very south end of Madison Ave right near the Flatiron building and across the street from Madison Square Park. A nice thing about being so close to the park, beyond the obvious benefit of being across the street from a park, is that the original branch of Shake Shack is there! Just on the other side of the park is Eataly, which is well worth checking out. Decent coffee, by American standards, for the morning and a great rooftop bar for the evenings. There was also a nice dingy sports bar by the hotel which was a great place to move onto tequila shots after we felt it was time to graduate from Italian wine and local craft beers.

It’s a fun and friendly part of town and I was glad to have spent the three nights there. It was right by the subway and handy enough for anywhere in the city. The building the hotel is housed in is the Metropolitan Life Insurance tower and was the tallest building in the world when it was built in 1909. Being able to spot your building when you get a little disorientated is certainly a positive. 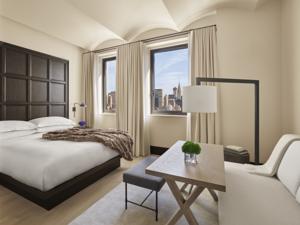 We stayed in a lead-in room and it was on the smallish side but definitely fine by NYC standards. As the hotel had only been open a few months, everything was new and shiny. The rooms are modern and sleek and we had a great view. We could even see the One World Trade Center from the window.

The room was stocked with Le Labo toiletries and seriously comfy bathrobes with hoods.
The room was everything you would expect from a hotel of this standard and we didn’t have any complaints at all.

The staff at the New York EDITION were friendly and professional almost to a fault. It’s fairly business-like service but the staff are all beautiful and smiling and every request is taken care of promptly.

It’s a great business hotel and has a lot going for it, the best part probably being the location. Would I return? Probably, depending on the nature of my visit to New York. The only downside that could potentially be a reason to look elsewhere is that it’s a little bit vanilla ice-cream. If I was in New York for a fun weekend I would probably stay somewhere else. Maybe somewhere with a pool like the Trump Soho or a kick-ass rooftop bar like the Refinery.
All-in-all though, it’s an excellent hotel.