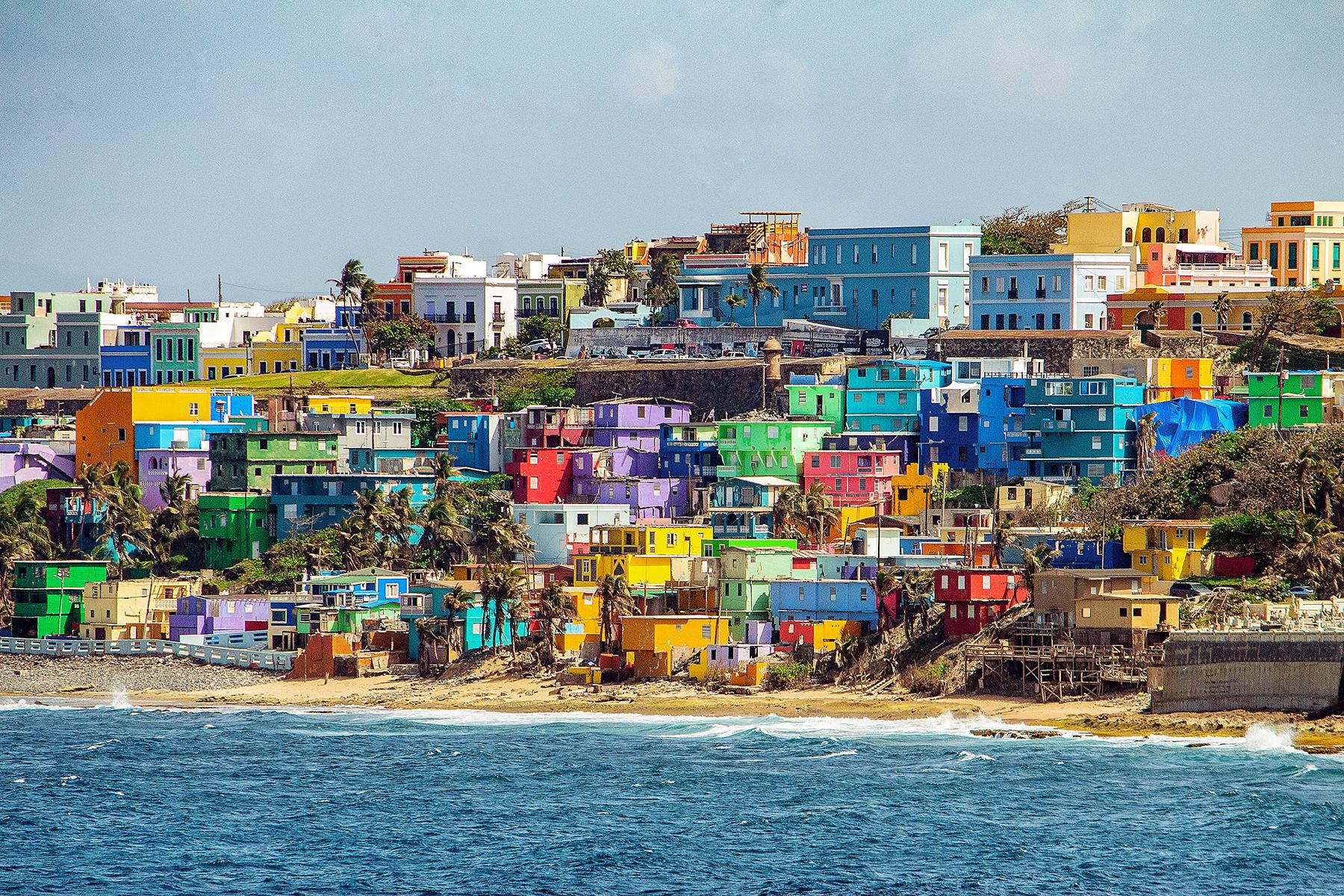 Puerto Rico is somewhere that’s perhaps not on many Australians’ wish lists but it absolutely should be. North Americans flock to San Juan and its tourist’s enclaves of Condado Beach and Isla Verde, which are a lot of fun and offer all sorts of great accommodations, nightlife etc.

There is a lot more to Puerto Rico though and I’m going to go through some great spots to stay and visit, particularly on the small island of Vieques.

Puerto Rico is an unincorporated territory of the USA. This means they use American dollars and that flying there from the United States is basically domestic travel. Americans don’t need a passport and security at the airport in both directions is significantly less tedious than international travel to/from the USA.

San Juan has a charming old town which is dripping in Spanish colonial awesomeness and is full of great restaurants and watering holes. It also has two main tourist districts called Condado and Isla Verde. These two areas are home to the bulk of international chain hotels such as the Intercontinental, Ritz Carlton, several Hilton and Marriott properties etc.

The Hilton Caribe in San Juan is the birthplace of the Pina Colada and is also the setting for much of the novel The Rum Diaries by Hunter S. Thompson.

The San Juan Water & Beach Club Hotel in Isla Verde is a great choice for those looking for a bit of nightlife. It has a fun rooftop bar looking out over the Caribbean and really cool modern decor throughout.

One restaurant I’d recommend that is a must-visit when in the mood for an absolute pig-out is Raices in the old town. This place was featured on Man V. Food if that gives you some idea of the feed I’m talking about. They do a giant pork chop which is basically a deep fried two inch thick whole bacon rasher that comes with all the traditional Puerto Rican sides like rice and beans. This is obviously subjective but in my eyes it’s a two man job.

San Juan is great for a few days but the real selling points for Puerto Rico are the two smaller islands of Vieques and Culebra.

Culebra is home to Flamenco Beach which is a permanent fixture on any top ten beaches in the world list you might come across. As such it can get quite busy during the peak Caribbean holiday season of the northern hemisphere winter. Culebra is a gorgeous island and absolutely worth checking out but it is missing one key ingredient. There aren’t really any 5 star luxury resorts.

Vieques was, until not long ago, mostly a US military base but is quickly transforming into a popular tourist destination. When I say popular, it’s not Patong or Kuta but there is definitely a steady growth in visitors and development. Much of the island is still sparsely developed and populated though, and it really has that special-something paradise factor for it.

There are plenty of accommodation options on the island but the jewel is the W Retreat and Spa. This property has mercifully come down in price over the last few years and is actually quite affordable these days, particularly when you take into account the experience that is on offer at this fantastic resort. 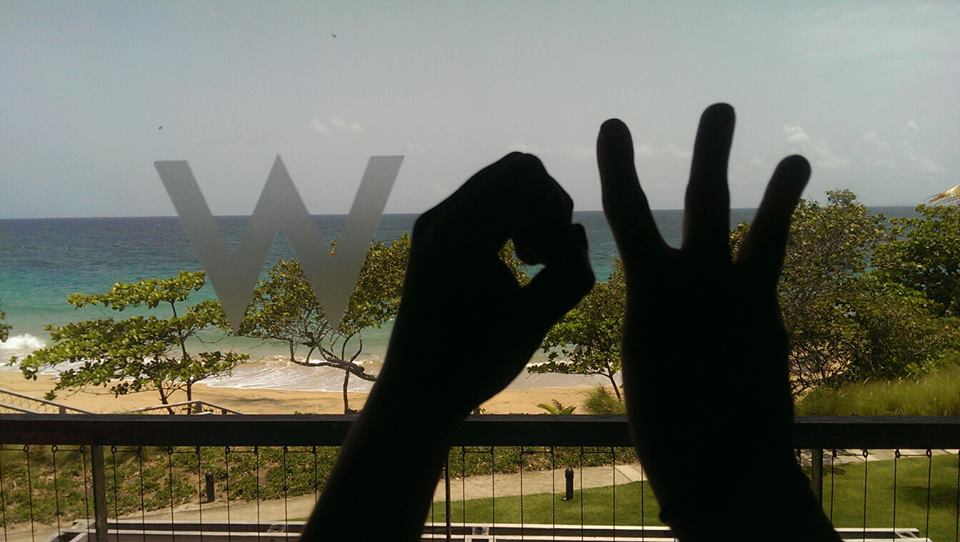 The W in Vieques boasts two private beaches, one of which is adults only, a couple of pools and huge beautifully landscaped grounds. The rooms are fantastic and those with ocean views are absolutely worth the extra money. The property provides guests with snorkels and flippers and a variety of other non-motorised water sport equipment at no charge and has a car rental place that only rents out Jeep Wranglers. This is important when on Vieques. You need a car and a Jeep seems completely appropriate.

The reason you need a car is that you’re going to want to explore the island and get to the best beaches. While the W Retreat has two of its own, these pale in comparison to the perfection on offer a short drive away. Most of the beaches on Vieques have two names, one being the Spanish name and one being the US military’s name. The US names are all colours, so Blue Beach, Red Beach, Yellow Beach and so on. 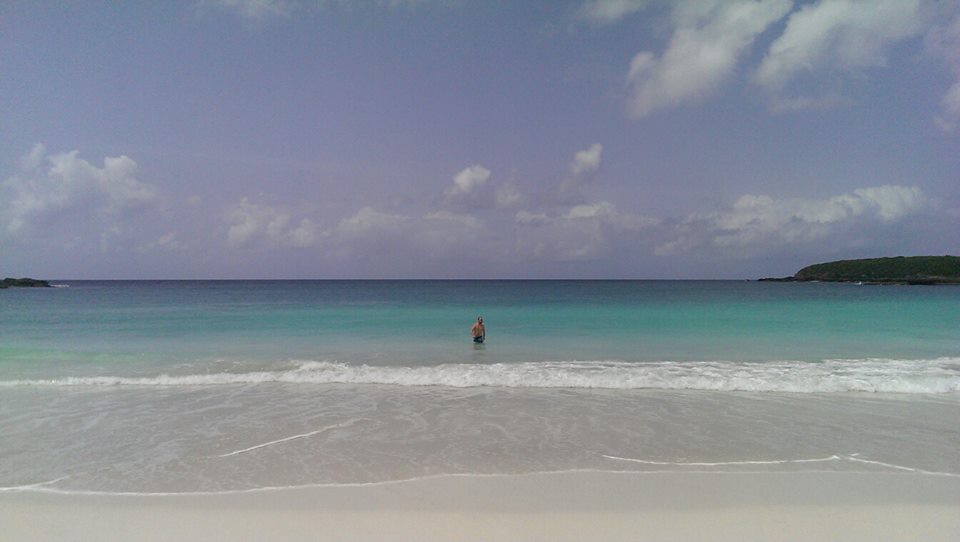 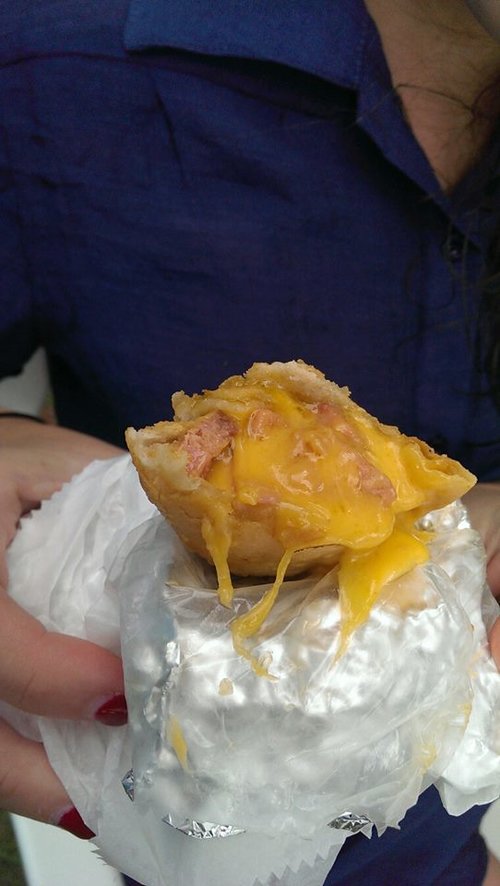 My favourite is Red Beach also known as Playa Caracas. Wow. Just wow. It’s really beyond words how amazingly perfect this beach is, it’s a true paradise and only a 15 odd minute drive from the W. Maybe a twenty-minute drive if you stop off at the Sol Food van on the way for a three cheese and ham empanada. Definitely worth the detour.

Apart from all the amazing beaches, Vieques is also home to the most active bioluminescent bay in the world. The bioluminescence is a natural phenomenon that results from plankton in the water that light up when disturbed and is one of the most surreal things to witness. People travel halfway around the world to Vieques for the sole purpose of experiencing it.

One thing worth noting about Vieques is the wild horses. The island is inhabited by horses that roam freely and you encounter them constantly. Most of the time this is amazing! Waking up and having your morning coffee watching a bunch of horses and calves grazing on the grass below your balcony in front of a dramatic Caribbean panorama is very nice. Driving down the main street and having ten horses stampede across the road in front of you unexpectedly is not. 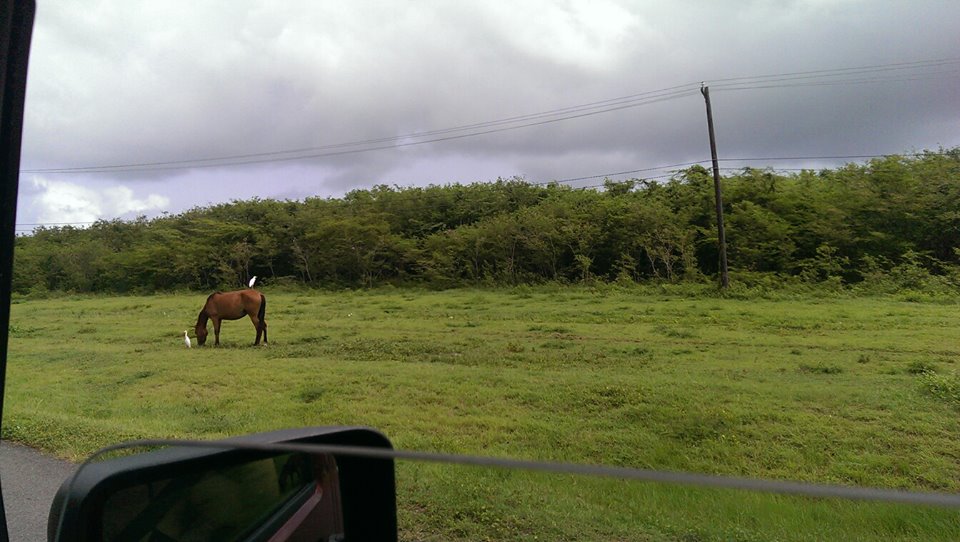 The west coast of Puerto Rico is a surf mecca during the northern hemisphere winter months as I’m sure anyone reading this that is interested in such pursuits is well aware. I’m not going to go into any detail on that part of the island but am going to just touch on one other resort back on the east coast that works perfectly as the last stop on the way back to San Juan, the continental USA and home.

The St Regis Bahia Beach is ridiculous. It’s an absolutely top-end property closer to the Ceiba airport than SJU. When you arrive at the St Regis there’s a big security gate and then, you have arrived! Driving from the gate to reception takes about 10 minutes and every square inch you cover is manicured to within an inch of its life. It’s truly spectacular. Once checked in you can expect world beating service and amenities at every turn, it’s truly top end in every regard. The beach is honestly not all that good, especially after Vieques, but the pools, grounds, rooms, bars and everything else available at the resort will have you not even noticing the beach. The rates at the St Regis can be a little heavy but you can score some great deals there from time to time.

The St Regis is also pretty close to an awesome strip of food outlets at Luquillo Beach that’s well worth a visit and gets pretty lively at night. It’s hard to explain but it’s basically a strip of kiosks selling all sorts of awesome greasy Puerto Rican food and beer.

Flights from San Juan to Vieques

The short flights between San Juan and Vieques are only operated by a couple of small local and regional carriers including Cape Air and Vieques Air Link. When I say “short flights” I mean it. From San Juan to Vieques the flight takes about ten minutes and from Vieques to Ceiba on the east coast takes six minutes. VAL operate these routes on little 8 seater aircraft and these flights are fun!!! 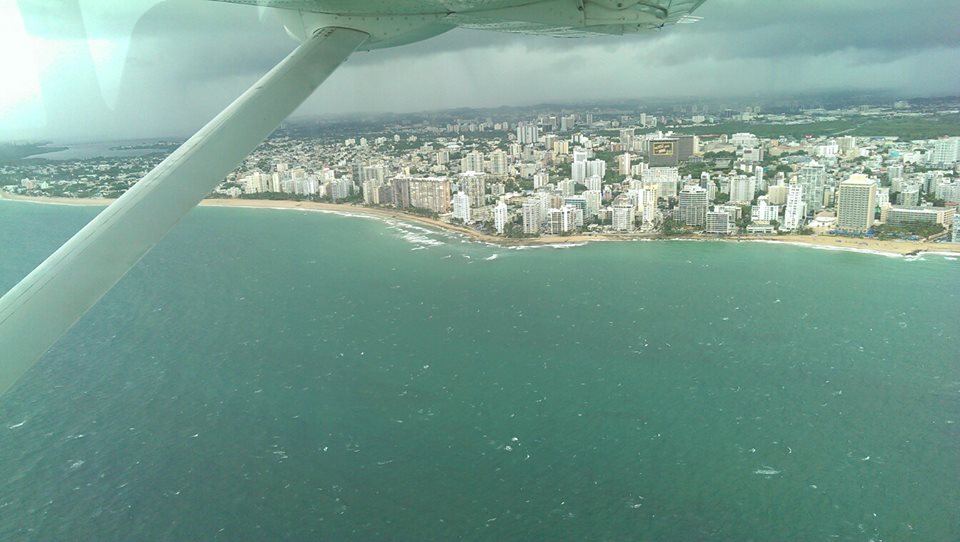 They’re also really cheap. San Juan to Vieques can be had for as little as about US$70 one way but is more commonly about US$120.

The shorter flight to Ceiba usually costs around US$35. Pretty awesome for such a great experience.

You can catch ferries between the main island and Vieques for less cash but getting to the port in Fajardo, queuing up for tickets, queuing up to board and all the rest of the hassle involved in this mode of transport in Puerto Rico is absolutely not worth it.

Another great thing about the flight to Vieques is that the W Retreat & Spa has its own arrival and departure lounge at the tiny airport that has a bar stocked with Puerto Rican rum and snacks, fast wifi and comfy seating where you can get checked in and have a drink before your free transfer to the hotel arrives.

Getting to Puerto Rico

Flights to Puerto Rico aren’t usually all that expensive from Australia as they are usually common rated with many cities on the East Coast of the USA.

At the moment, depending on seasonality and availability, return flights from Sydney to San Juan with American Airlines start at about $1550 per person including taxes. It’s also possible on these fares to add stopovers in the continental USA for a small amount of additional taxes. So for example, you could visit Los Angeles on the way out and Miami on the way back. Or New York on the way out and San Francisco on the way home. We can obviously construct your airfare exactly the way you want it to make sure you’re getting the holiday of your dreams for the best price.

Please feel free to give us a yell if you’d like to have a chat about booking a trip to Puerto Rico! 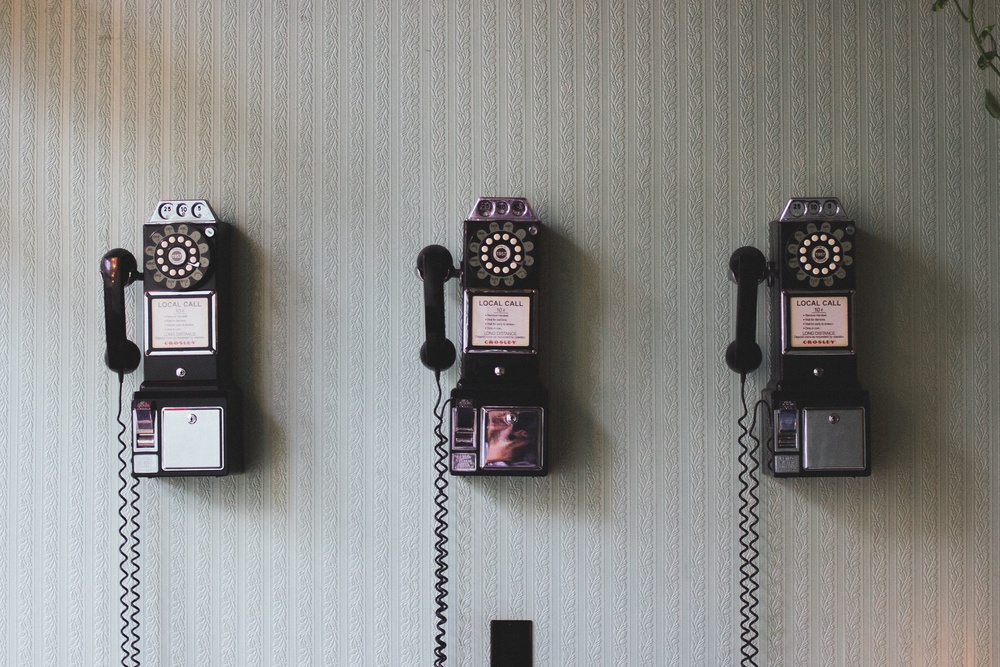